Notice: Function acf_get_value was called incorrectly. Advanced Custom Fields PRO - We've detected one or more calls to retrieve ACF field values before ACF has been initialized. This is not supported and can result in malformed or missing data. Learn how to fix this. Please see Debugging in WordPress for more information. (This message was added in version 5.11.1.) in /sites/childrenscampusofkansascity.org/files/wp-includes/functions.php on line 5831
 Dean Olson Announces Retirement - Children's Campus of Kansas City 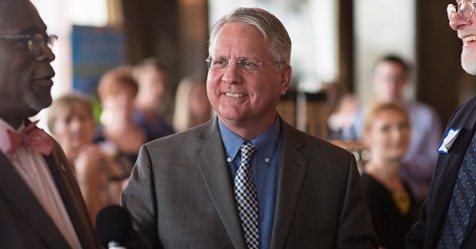 TFC to Enter a New Chapter

After more than 40 years in the field of human services, president and CEO of The Family Conservancy (TFC), Dean Olson, has announced plans to retire at the end of 2019.

Olson began his career as an art teacher on the Westside of Kansas City where he gained a deep interest in social issues and their impact on the children he taught. In 1993, Olson earned a master’s degree in social work and joined TFC as a clinical social worker.

After serving in several roles, and a national search to replace the retiring longtime CEO, Olson was named president and CEO in December 2014. He has been a leading force behind a great deal of positive change at the organization. Under Olson’s leadership, TFC has continually increased its impact and strengthened efforts to create opportunities for children and families.

“While I look forward to having time to pursue several interests in retirement, this has not been an easy decision for me. I am deeply grateful for the support and encouragement I have received in my 26 years at the organization. While there is never a perfect time to leave the work you love, I feel the direction of the agency has never been stronger and this is a great time for TFC to transition to its next leader. I am confident that the team of dedicated board, staff and the generosity of the Kansas City community will continue to create bright futures for children and families.” commented Olson.

TFC board chair, Stephen Nixon, is optimistic about the transition. “Dean, and those who came before him, have created a firm foundation for TFC that will allow the organization to continue to create better outcomes for children and families, especially through some of the most recent endeavors to increase access to high-quality early education.”

The Family Conservancy board of directors is currently engaged in a nationwide search for Olson’s replacement and hope to have a new CEO in December.

Learn more about The Family Conservancy.